Calling all lovers of wolf shifters, werewolves, and lycanthropes! Whatever you call these people who turn into wolves, I have a great collection for you to peruse! In fact, I received so many recommendations that I have to split this post into two parts! The second part will go up next month. 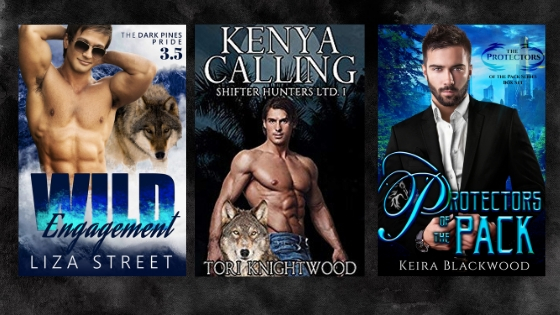 Becca’s mama didn’t raise no fool. When a naked hottie on the side of the road asks Becca for a ride, she agrees on one condition: he has to squeeze into the trunk.

Tragedy made her a shifter hunter. He would die to protect his family’s secrets. When business brings them together in Africa, sparks and claws will fly.

The Protectors of the Pack Box Set – Keira Blackwood

Running from trouble, running to trouble, and confronting the source. Two packs come together to defend against a mercenary biker gang. Expect motorcycles, wolves, a case of mistaken identity, a reluctant assassin, fiercely protective shifter men, three very different couples, and a whole lot of fun.

Welcome to Dundaire, Scotland, a magickal city that doesn’t appear on any map, where kilt-wearing, immortal Highlanders are plentiful, and where romance and danger brew daily…

When Akira sets out on a quest, the last thing she expected was to find her soulmate. But when the wolf begins to whisper, it must be answered, and matters of the heart are just going to have to wait…

For Rhianna, being a runaway princess was never easy, but the apocalypse and the pack of wolf shifters chasing her just makes it harder.

What better way to cure a patient, than by biting them?

His mate, his bloodkin or his clan, this wolf will have to choose…

A wolf shifter seeking a pack mate discovers another type of mate during her hunt.

Nothing will stop Raymand from creating his own family with his mate. Maple will challenge the alpha to keep Cora in their lives.

The one question she often asks herself is why. Why has she never been enough?

When a murder case takes a dark turn, will Natalia be able to rely on her animal instincts to keep her alive? Ryder is a submissive at Inferno but he is also a incubus who helps the local police. Can he and Cage, the new owner of Inferno, help find the killer before he claims the woman that has become infused in their blood?

Check back in April for Part 2 of the wolf shifter round-up!