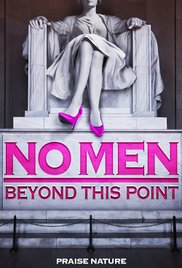 In a world where women have become asexual and are no longer giving birth to males, a quiet, unassuming housekeeper named Andrew Myers (Patrick Gilmore) finds himself at the center of a battle to keep men from going extinct.

My husband and I still argue over who added this DVD to our Netflix queue, and once it arrived, it took us weeks to sit down and actually watch it. But once we did, we were delightfully surprised. It’s awkward at points, which isn’t our usual comedy preference, but the concept was interesting, and the images of men doing all the manual household labor was…well, I don’t know that it was funny, except maybe for the visual of a male character hanging bras and panties out on a clothesline.

The film is set up as a documentary, and focuses on a household run by two women who have “hired” a man to keep house. He’s the youngest man alive–the last male infant to be born. A forbidden romance develops, and it was fascinating.

Men are definitely set up as second-class citizens, which I think was supposed to be humorous on its own. It’s…funny, I guess? Except for the fact that it’s too easy to see the roles reversed, and that’s not funny at all. I mean, I read The Handmaid’s Tale. So other than the clothesline part, I wasn’t really laughing.

The subject matter was at turns humorous, enraging, and sad, and if my husband still refuses to take credit for choosing this DVD for our queue, well, I’ll happily shoulder the responsibility.